A human visitor catches a moth visitor from the south...

Recently Richard Baker visited his relatives at Gelli Deg near Kidwelly and on the thundery and rainy night - but with winds tending southerly - of 29th October he set out his trap. The next morning provided some pleasing thin-on-the-ground seasonals such as a brick and a grey shoulder-knot but, best of all, was a micro that was probably blown in on the southerlies - Crocidosoma plebejana, a 2nd county record. Well done Richard! 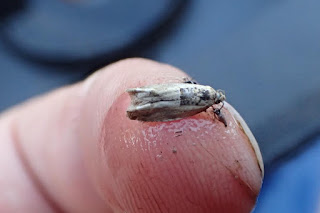