We all know that the Clifden nonpareil has, this autumn, earned its classification as a `bogey moth` as far as I`m concerned, though a very decent scattering of other local moth trappers have caught this magnificent moth.

A species - albeit not as grand - that has been another of my elusive bogey moths is the micro Ectoedemia argyropeza, which is found on aspen. I`ve looked and looked for it in recent years on fallen leaves of aspen as well as those still on the trees, though searching for discarded leaves can, at times, be difficult or quite impossible if the ground below is marshy, brambly or otherwise awkward.

As the weather (compared to last week`s deluge) was fine, today I had a leaf-mining session along the Llanelli coastal belt, in the Morfa and WWT Penclacwydd areas. Near the latter, I was following the coast path as it skirts the northern boundary of the WWT property and, on a grassy verge, were many aspen leaves. Looking down I spotted a contender - a leaf with a `green island` near the petiole/lamina interface and it was argyropeza! With this success, I looked for more - a careful `double search` (there and back) of c 50 ft of verge, but no more candidates could be found. There is one record listed in Sam`s 2016 Carms list ( probably George Tordoff`s near Cross Hands), but I also seem to recall a subsequent record or two.

Funnily enough Chris Manley reported (online) finding this micro as well as Phyllonorycter acerifoliella a few days back and I `d assumed that he`d recorded them in Carmarthenshire - but his finds were across the estuary at Penclawdd. I also confused (typical IKM crossed wires - it was late on Saturday!)when I stated that I`d never had P. acerifoliella whereas I`d meant to say argyropeza! I`ve recorded acerifoliella on several previous occasions on the many planted field maples in the Llanelli area, including three times yesterday and today. 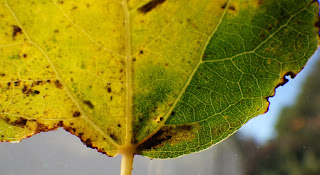 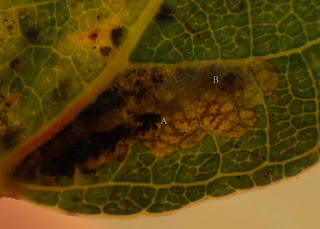 Above: the first photo shows the green island where chlorophyll has been retained around the larva, whilst the second photo shows a close-up with the larva marked A-B - only a vague shape can be seen in this photo but, with a hand lens and held against the light, it can clearly be seen `wriggling away`.
Posted by Ian Morgan