Unlike Chris Handoll`s diverse mix of recent moths, my efforts have only brought results ranging from poor to dire (one suitable night only yielded two common marbled carpets!), so it was pleasing to have a better variety - but still only five species - on Sunday night (17/10). Best of the bunch were two residents that have taken to suburbia and its various planted Cupressus conifers, namely two cypress carpets and a Blair`s shoulder-knot; both species are relatively recent colonists in the British Isles. At Pwll I also used to catch, in season, two species of Argyresthia - cupressella and trifasciata, as well as the cypress pug. The other species caught on Sunday were Merveille du jour, red-line quaker and angle shades. 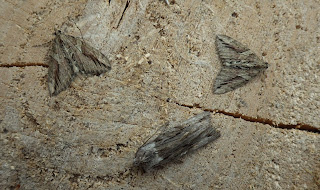