I put out the garden actinic trap for the last few nights, but have nothing really newsworthy to report. Unlike in Ceredigion where I note that a death`s-head hawk-moth turned up, my migrants were limited to a couple of silver ys and a rush veneer. The ideal trapping conditions of last night (Fri, 7/10) yielded a dozen species of mostly typical autumnal species, a couple of which are shown below.

Arfon `Clifden` Williams continues to trap in `far north` Carmarthenshire and very recently he reported his FOURTH Clifden nonpareil, strengthening the suspicion that it may be breeding locally. Arfon says that one of the food-plants, aspen, grows nearby. By my count we have now had eight 2021 sightings of this magnificent moth since it was first trapped, as a new county record, by Adam Dare at Burry Port. Arfon also has recorded a streak - but it was  just over the county border in Ceredigion. Two moths that I`ve never seen! 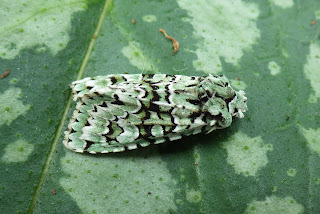 Above: merveille du jour and, below: beaded chestnut. 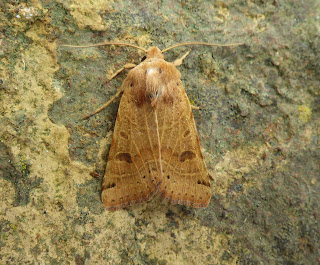