Although the BBC weather presenter did say that showers would occur over Wales, both the online BBC forecast and the Met Office forecast suggested - for Llanelli at least - only a <5% chance of showers. So, out went my washing and out went `yours truly` who has been `confined to barracks` since Sunday. I intended to do some casual, unfocussed leaf-mining in the Millennium Coastal Park and to later visit the almost adjacent Stradey Woods, just to see `what was about`.

`What was about` was a load of showers which gave me a good drenching but at least the onset of the first heavy shower did flush a moth, which I luckily was able to catch with a plastic container. It was a rusty-dot pearl. 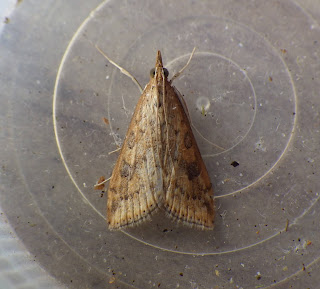 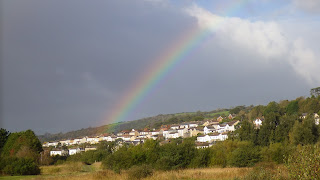 Above: some lucky blighter may have had a pot of gold awaiting him at home. All I had was a sagging line-full of sodden clothes!