I`ve trapped consecutively for the last three nights but, although a suitably large container is ready for large and glamorous VIP moths, the Clifden nonpareil has n`t turned up!

As is the case with trapping on warm nights, the species mix can vary, suggesting local movement or dispersal of moths but, until last night,  the only migrant was a single silver y. Last night the number of that species increased to three (!) and they were accompanied by a dark sword-grass. A turnip moth may also be a migrant but, equally it could be a coastal resident here in SE Carms. 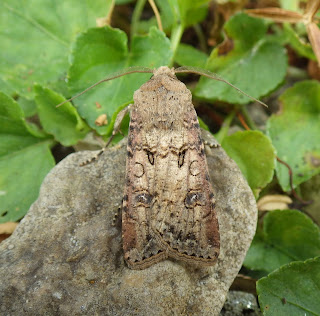 Above: I pondered this moth for a while but believe it to be a turnip moth. Corrections welcomed. 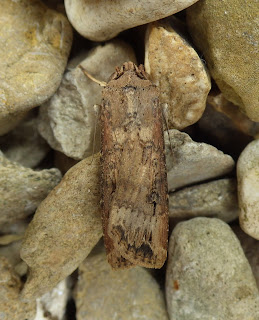 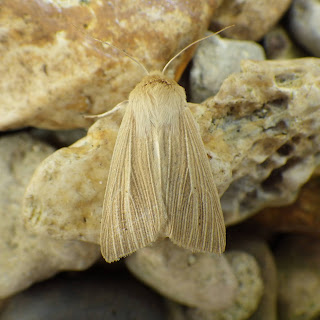 Above: common wainscot - which is not that common in Carmarthenshire. A few have been in my traps over the last few nights. 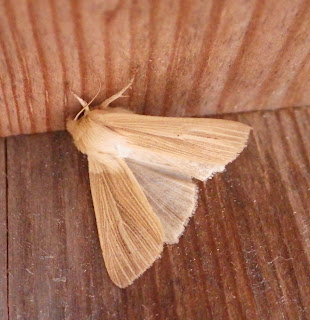 Above: a poor and blurred shot of the wainscot, showing the white hind wings etc.

The moth gurus are predicting migrant possibilities tonight (Weds, 8/9), with SW Britain along the route of thundery weather - always good for moth trapping - coming from the south-east and the near Continent. The forecast accompanying heavy rain means that my mains actinic has been moved down from its normal flat roof habitat to the lawn, the latter a less than satisfactory location due to loss of height and blocked sight lines for passing moths. If the trap had been left on the roof, heavy rain would result in many drowned or bedraggled and spoiled moths in the rain puddles that gather there. Both the actinic and my MV traps will be sheltered from the worst of the weather by my home-made screens. 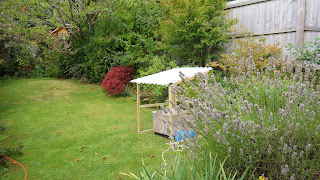 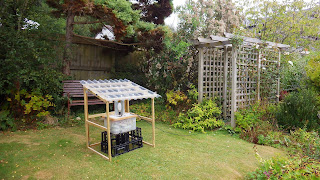 Above: the actinic and MV traps - `fingers crossed` for a migrant or two!