I put a single actinic trap out last night (Weds, 15/9) and was pleased to see some evidence of migratory species. That big, beautiful moth with blue hind-wings still evades me but 5 silver y`s, a rusty-dot pearl and a vestal provided a tiny amount of compensation. Some autumnal resident moths are also starting to make an appearance. 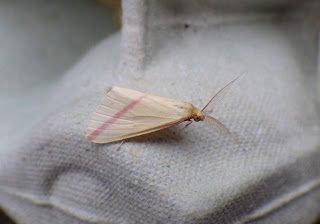 Above:  a`record shot` of last night`s vestal in situ in my actinic trap. 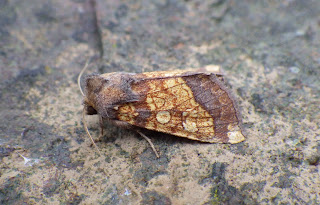 Above: frosted orange.
I had to collect some items from a friend this morning but, as I was early, I went for a short walk along the lane by his Bynea home. Feasting at blackberries along the estuary-edge path was this comma butterfly and, as a bonus, feeding in the shallow pools of the Afon Llwchwr close-by were exactly 55 little egrets. 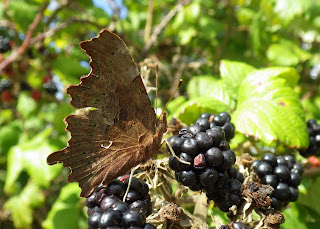 Above: comma at Pencoed-isaf, Bynea, Llanelli. The `dead-leaf` camouflage always impresses with the dark lines on the underwing also giving an impression of peeling bark - click on pic to enlarge..