After various alerts on Twitter that last night (8/9) would be potentially good for migrants in SW Britain, out went my two garden traps. The forecast was for heavy rain and, although at first the showers were both light and brief, as the night progressed heavy and continuous rain was the norm - indeed I could n`t visit the traps at first light due to its intensity.

I`m sad to say that no migrants of note were awaiting me - in fact no migrants at all! But then, if I had n`t trapped, there would be lots of `what if` thoughts in my mind: `if you don`t try, you don`t get` is an apt maxim to remember. My best moths were a rather fresh cypress pug and a treble bar, the latter presumably a local wanderer from the nearby coast, as it is a local moth that I personally associate with dry brownfield or coal spoil sites.

Above: awaiting the migrants that did n`t come - actinic in the foreground and the distant light of the MV trap. 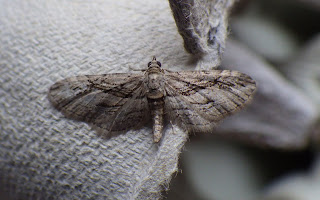 Above: an `in-trap` shot of the cypress pug. 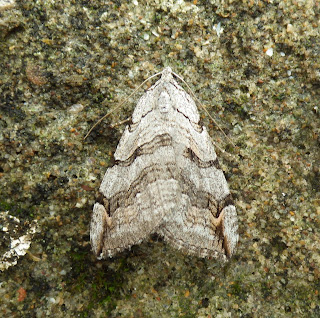