I had two actinic traps out last night and they attracted more moths than I've seen for some time.  The most abundant species were, unsurprisingly, Brimstone Moth and LYU, closely followed by Flame Shoulder, Square-spot Rustic, Rosy Rustic, and Copper Underwing.  Amongst the micros there were numbers of Acleris laterana/comariana and a Dichrorampha species, probably D.acuminatana, which I have also seen about the garden during the day: 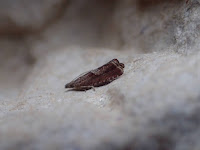 Dichrorampha acuminatana (?)
I also came upon a very dark, almost black, Pyralid which I've been unable to put a name to: 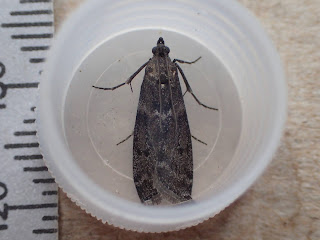 It bears a strong resemblance to published images of  both Apomyelois bistriatella and Matilella (Pyla) fusca, and it may not be possible to distinguish between the two visually.  Advice would be much appreciated.
Posted by Chris Handoll