Hoping - desperately - to catch a Clifden nonpareil last night, I persisted and set out the mains actinic in a highly visible position on the flat roof. The catch this morning was not only totally devoid of any migrant moth but it was exceedingly poor by average standards. It was so bad that I did n`t bother to list the bland variety of species present - it was a complete waste of time. If it is `back to normal in Burry Port` (see Adam`s preceding blog), it is sub-normal with me.

This morning an email arrived from Arfon Williams in north Carmarthenshire (N of Ffarmers and not far from the Ceredigion boundary) announcing that he`d caught both Palpita vitrealis and.... a white-point; two `classy` migrants and the latter new for Carmarthenshire! The photos are shown below.

It shows that you do not have to live at coastal locations to catch migrants - something that has been previously demonstrated by others in the county - Chris Handoll had the year`s only gem recently and Stephen Ruttle has caught several excellent migrants over the years at Graig farm near Halfway in NE Carms. The moth `funnelling effect` of trapping in or on the edge of a valley may be also operating with Stephen and Arfon. The lack of competing urban lights will also help - my suburban home site is disastrous in that respect (I should have stayed at Pwll!). 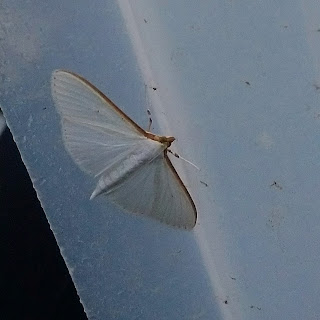 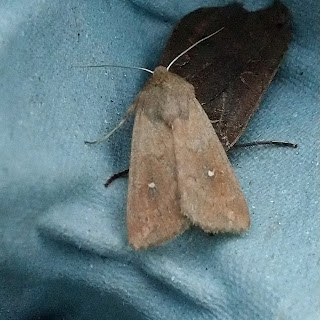