Back to normal in Burry Port

Heeding exhortations to trap, I set up for an unprecedented fourth night in a row. The forecast rain duly arrived and in the morning the Dare Miracle Moth Sheet (TM) was well and truly soaked. Surprisingly the trap was dry and all my precious egg-boxes survived to trap another day. The trap was largely unexceptional with Large Yellow Underwing back to dominance, with 23 specimens the only species to get into double figures. My second ever Rosy Rustic was as lovely as the first and Vine's Rustic numbers reached 4.

Having previously told Jane I wouldn't recognise Cypress Pug if I saw one, I'm pleased to withdraw that statement as they are distinctive and attractive little moths, and I was pleased to nab one as it lingered near the trap. 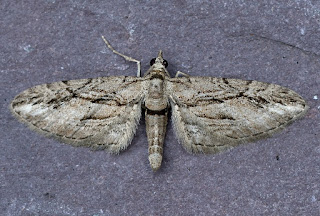 I also found a curiously pointy, little, sharp-faced Tortrix that was new to the garden trap. After much thought I decided it was Dichrorampha, most probably plumbana. As usual I will be delighted to hear from anyone who can firm up the diagnosis. 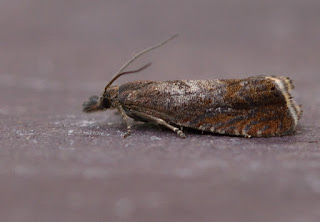 This was a flighty creature, but I got a couple of frames in before it fled.
Posted by Adam Dare