A lovely mild and overcast night on the 30th tempted me to put the actinic out again - the previous night had been very disappointing so I was none too hopeful. However, I found a full trap the next morning and set to with notebook and tubes. Lots of  over excited Thorns were unwilling to settle, Canary - shouldered, Dusky and August all departed swiftly over the horizon, next to escape was an Anomalous that I just missed potting, closely followed by a Purple Bar, one of 6, and several Brimstones. I did eventually sort myself out and ended up with  145 macros for 41 species, including 5 Anomalous which I have only seen once before. New for Year were some beautifully pink Autumnal Rustics and a single Frosted Orange. Two new species for the garden are, I think, Neglected Rustic x 2 and Striped Twin-spot Carpet x 2. 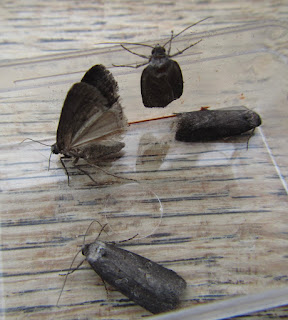 Four of the Five Anomalous, a poor pic but they were very lively. 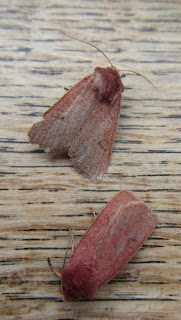 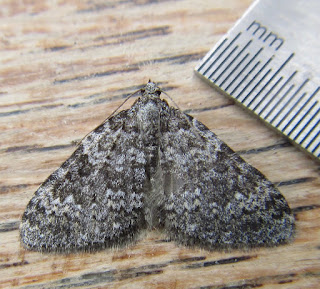