The small 6W actinic trap has been used a couple of times in the past week and has attracted good numbers of moths and upwards of 40 species on each occasion.  It's quick and easy to set up, and to close down at daybreak, meaning that I can get back to bed (us old-timers need our shut-eye, and the mammoth effort during NMN took its toll!).

Worthy of mention from the latest session, on Friday night, were Grass Emerald, Phoenix, Northern Spinach, and several Magpie Moths.  Amongst the micros were this Tortricid: 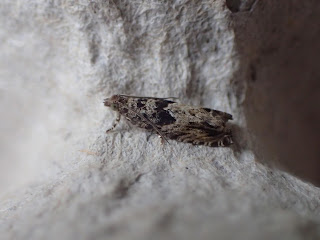 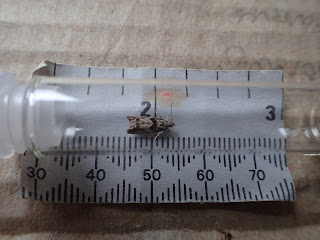 I believe this to be Epinotia nisella/cinereana, but since it lacks the brown dorsal mark of the former it seems likely to be the latter species.  Unfortunately cinereana (1138a) isn't listed on my Excel record sheet so I may have to record it as nisella, which I've had a couple of times before.