The garden trap on Saturday night (14/8) yielded what only can be termed a moderate mix of seasonal moths. Two orange swifts were nice and a flame carpet added a little colour. Large yellow underwings and lesser broad-bordered yellow underwings have made a big late summer jump in numbers. 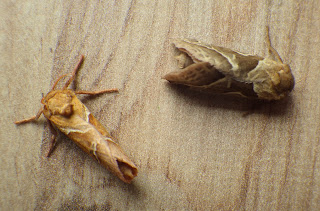 Above: a rather poor blurry photo of two orange swifts - an orange male and a brown female. Above: a willow beauty. It was impressive how the disruptive camouflage merged into the background when the moth was viewed from a distance. 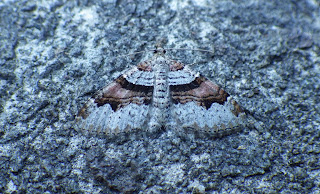 Above: the second brood flame carpet.
What about the `mind over matter` in the title? There two pugs in my traps, one of which I immediately put down as a double-striped pug. The other was both larger and more colourful. Having decided that it was n`t a double-striped, I checked to see what other pug it was and, eventually, I put it down as a juniper pug, a very variable species and with an online photo approximating colour-wise to my specimen. Excellent, I thought - a really good record. Various features of the moth seemed to match juniper pug, but my mind was selectively only seeing what I wanted to see. I checked its Welsh distribution and other details and sent an email to Sam. Making a cup of tea, I thought that I`d better re-check it, in particular whether it was just a double-striped pug. Checking some photos, I then instantly realised that it was indeed a double-striped and I sent an email to Sam cancelling my previous i/d.
The above error stemmed from initially dismissing the obvious and then trying to pigeon-hole the i/d.
If I post in future a photo of a grass moth and announce that it`s a hawk-moth, be patient with me!
Posted by Ian Morgan