Chris Handoll used to call, with good humour, some of my past moth blogs that included a selection of landscape/habitat photos, `Visit Wales` or similar - there`ll be some here presently. Those earlier blogs were from the days, pre-2016, when I would spend one day a week (usually with Nigel Stringer) at a distant site, somewhere in Carmarthenshire. Yesterday (15/7) was one such day - though this time without Nigel - when I visited the Llanddeusant area. I had been enthused by reading one of George Tordoff`s articles in the journal Atropos (No 56, 2016) where he describes his finding of the rare Welsh clearwing in the uplands of the eastern Brecon Beacons National Park.

His description of the habitat of this clearwing - solitary or groups of mature or over-mature birches in an upland setting, brought to mind a location on the slopes south of and above Gelligron farm, itself located south of Llanddeusant church. I`d only visited the area twice before - in c 1984 and in c 1998, the latter time being memorable as I had netted a soldier-fly Oxycera dives (which before then was only known from in the Highlands of Scotland and northern England) on flushes in Cwm Mihertach, to the south-east of the farm. Alan Stubbs subsequently confirmed my find.

I knew that finding the Welsh clearwing would be a `long shot` and I regret to report that positive evidence of its presence such as larval exuviae or adults was not achieved. Possible exit holes (though these may be caused by eg longhorn beetles) are the best I can offer - see photos below. 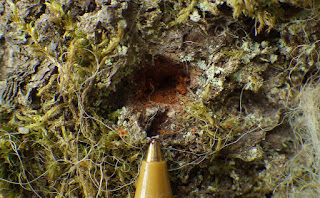 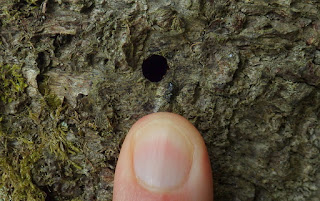 Above: two exit holes in an old birch, with biro and an index finger for scale. 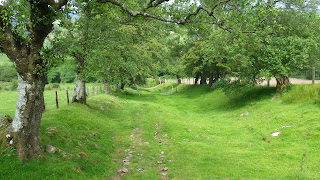 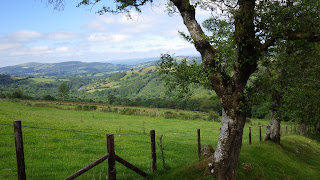 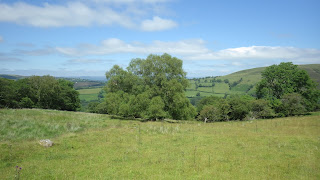 Above: some of the old birches lining the track (a PRoW) ascending the hillside (at c SN 779233) and (last photo) a truly massive old birch in a field to the c NE. I spotted a hare in this field enclosure - a pleasing surprise. 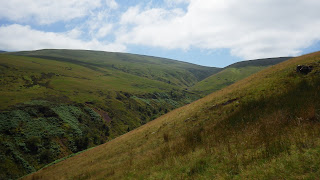 Above: the steep valley of the Afon Mihertach. I flushed a ring ouzel from a patch of bilberries here.

Above: the distinctively triangular peak of Bannau Sir Gar peeping over the horizon. The end of my ramble - `Bah` for now, as the locals in the photo might say on my departure.
Posted by Ian Morgan