The Festival of Britain does me a favour...

As part of the 1951 `Festival of Britain`* celebrations in Llanelli, a line of true black poplars (the so-called `Manchester poplar clone) was planted alongside Old Castle Pond at the western edge of Peoples Park, Llanelli in order to eventually hide the large steelworks (dubbed `The Klondyke` locally because of the good pay) to the immediate west. However, these steelworks were demolished in the 1980s and the visually attractive Sandy Water Park amidst the Millennium Coastal Park is in its stead.

I was taking advantage of the sparse shade whilst walking alongside what remains of this row of black poplars yesterday afternoon when serendipity cast a favour in my direction. A harlequin ladybird that had landed in front of me on a poplar trunk caught my eye and, after looking briefly at it, I thought that I could see a micro moth close by. Sometimes such sightings are imaginary (for me at least) and the `moth` turns out to be a bit of vegetation or a fold in the bark, but as my eyes focussed on it I could see that it was a `tort`. I had a small container on me and luckily `potting` it was without any problem.

Anyway, the moth is, I believe, Gypsonoma oppressana, a species that feeds in the buds of certain poplars. There is one previous Carmarthenshire record, made by Barry Stewart at Penclacwydd (if I remember correctly). I have actually been `on the look out` for it there in the past, with no luck. 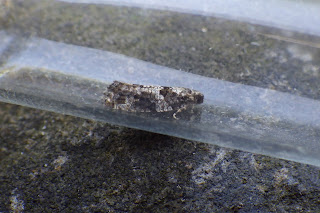 In spite of being in the fridge overnight, the moth is too flighty to risk a photo outside of the container.
* I have a book - covering `South Wales` as part of a UK-wide series issued to mark this event and the small section devoted to Llanelli mentions the industrial back-drop of the town, with tinplate and steel dominating. It also says that it is the largest Welsh-speaking town in Wales. How things have changed!