After I've removed all the egg boxes I have a good look at the surfaces of my moth trap. There's often a tiny micro clinging to the surface. Today was one of those days, and through a hand lens saw a bright white woolly head. 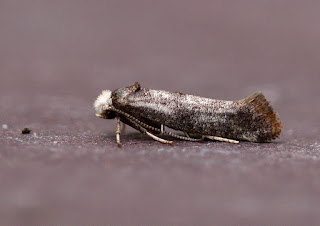 The "coppery" (I call it brown) tinge to the tail nails it as Swammerdamia pyrella and not one of the "Paraswammers" and "Pseudoswammers."

I also recorded my first Dun-bar of the year. 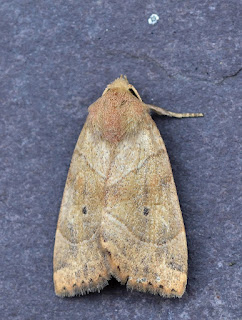 A really pale example. Also of note were my second Garden Tiger of the year, two Heralds, five Dingy Footman, including a pair in flagrante, and a surge in the numbers of Common/Lesser Common Rustic to seven. In all a meagre 56 moths, but of 33 species.
Posted by Adam Dare