I enjoyed the spate of moth trapping during last week`s hot spell and I still have some moths to report from trapping on Friday and Sunday nights - I did n`t trap on Saturday even though conditions were good, as I wanted a rest (so did the moths!). I`ll probably report on those two nights tomorrow...

Anyway, this morning I wanted to get some gritty `soil` from an ex-brownfield site at the eastern end of Pwll, Llanelli, the site being chosen for its ease of access/quick visit reasons. I had easily filled up the required half bucket with my trowel when I spotted a moth sitting on a leaf just to my right - about 2 ft away. It seemingly had been unbothered my all my movement whilst digging.

The moth was easily recognised - it was a least carpet, a species that is spreading westwards from SE England; it has one previous Carms record - made by Stephen Ruttle at Graig Farm near Llandovery, a couple of years ago. There is also a record from SE Gower. 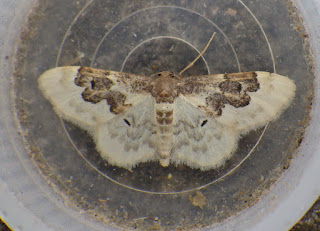 Above: the moth in question, a least carpet- luckily I had a tube in my pocket (I even carry one when I go shopping, `just in case`!
Returning home, I read that its food plant is Clematis and indeed there is a large patch (c 30 x 20 ft) close to where I spotted the moth, but a return visit this afternoon revealed nothing. Perhaps a late dusk visit will be more productive. I also went to Machynys (SE of Llanelli) but, again, no luck.

Above: Clematis at Machynys this afternoon.