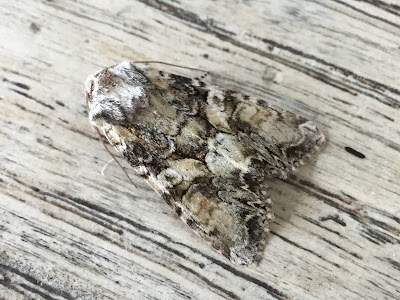 Among the 25 moth species that came to the porch light at Cnwc y Llwyn, Brechfa on the night of 13th July was this unfamiliar moth. I must confess I initially dismissed it as a Grey Arches (having not seen one this year) but then thought it was rather Brocade-like so potted it up. The pale band linking the orbicular stigma to the pale subterminal band is indicative of Beautiful Brocade, an identification which several other moth'ers have agreed with.

This is the first photographed record of Beautiful Brocade from VC44, but there are also 7 records in the Pended section of the database. Six of these were made by Jon Baker at Trawsmawr in 1998 and 1999, and Jon subsequently discounted these because of the variability of Pale-shouldered Brocade, the lack of photos, and the lack of records at this regularly trap-site in the following years. Steve Clarke also recorded one at Cwmllwyd in 1999 but took no photographs and the species was never seen again at the site. Comments on Twitter suggest that Beautiful Brocade is having a "good year" in 2021, so perhaps 1999 was also a good year. Regardless of past records, it is good to have this aptly named species added to the official VC44 list.