I had the two garden traps out last night (15/7) and the results were much better than of late - presumably the hot nights contributed to the improvement. Both variety and numbers were good and micro-moths put in their first significant showing of the season (for me, at least). 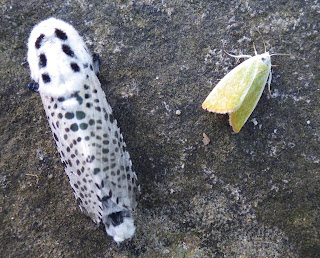 Above: Two nice moths - a leopard and a cream-bordered green pea, the latter is my second individual this year. 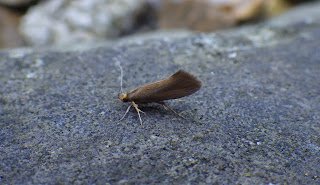 Above and below: The `tail-up` stance caught my eye - it`s Batia (=Crassa) unitella, an infrequently-recorded moth whose larvae live under bark. According the Carms 2016 summary list, this would be a 2nd vcr. 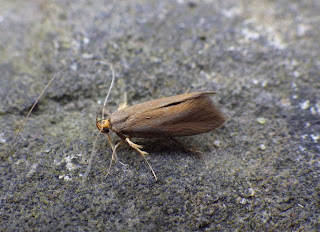 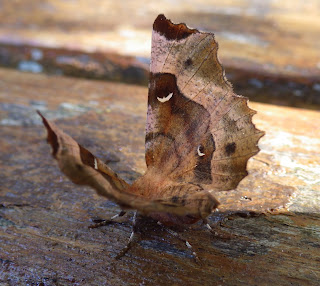 Above: a purple thorn with its characteristic `wings-up` posture. 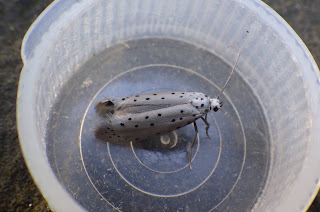 Above: Yponomeuta padella, the orchard ermine. 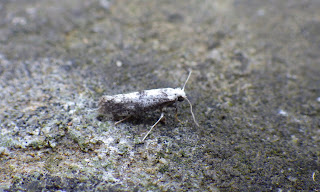 Above: this Swammerdamia albicapitella only allowed me a couple of photos before taking flight. Note white thorax. Only a few Carms records (three on the 2016 listing). 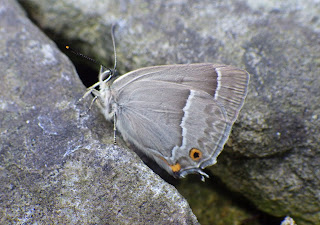 Above: also `skittish` was this female purple hairstreak (caught in the actinic light trap) which also only allowed me two slightly blurry photos before taking flight, in spite of a spell in the fridge. It was a female as it had much less purple on the upperwing.

Above: whilst weeding around my young alder buckthorns that I had previously grown from seed extracted from the berries, three caterpillars of the brimstone butterfly were spotted. They were feeding on the smaller (< 1ft) plants. A mature shrub (c 15ft high) in nearby woodland had no sign of feeding.
Other butterflies in my garden today were a couple of holly blues and a red admiral but most interesting of all was a pristine male silver-washed fritillary, spotted at bramble blossom in a sunny clearing at Stradey Woods, Llanelli.