The Robinson MV was out here last night, only the fourth trapping session of the month, the previous one being on Friday night when the trap of choice was a Skinner type actinic.  In terms of numbers, both gave similar outcomes with moth numbers in the mid-30s, species mid-20s.  Here, Brindled Beauties have been replaced by Peppered Moths and Pale Tussocks.  Scalloped Hazels, Muslin Moths and Buff Ermines have also featured.  Last night brought the first Hawk Moth of the year (Poplar). The highlights of the month have been Great Prominent on May17th, a Puss Moth on Friday night (the first for three years), and Tawny Pinion last night: 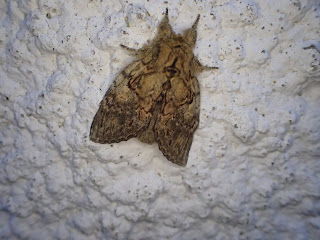 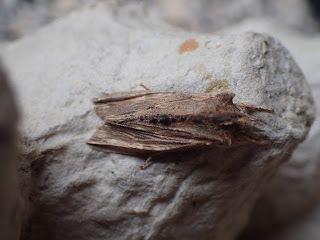 Tawny Pinion
The traps have also been visited by several Longhorns which I believe to be Nematopogon swammerdamella: 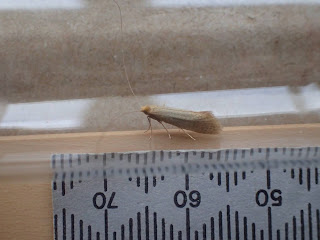 Yesterday I apprehended this small moth which had alighted on an Ox-eye Daisy plant in the garden:

I suspect that it's a Dichrorampha species, probably D.acuminatana on account of the prominent white band at the termen.
Posted by Chris Handoll