The southerly winds last night (9/6) prompted me to set up the garden traps, but the catch this morning was limited both in quantity and variety. Apart from a solitary silver y there were no hoped-for migrants. A lime hawk-moth was nice - it`s a regular here in west Llanelli, as it was when I was living in Pwll.

There have been two inland trappings of lime hawk-moth reported to Sam in the last week or so - at the National Botanic Garden of Wales by Katie Richie and in the Amman Valley by Lizzie Wilberforce. I suspect that the species is probably elsewhere in SE Carms and also along much of the Tywi Valley; it feeds on elms as well as limes, so the absence of the latter is not critical. It was first recorded at Pwll back in c 2003, so it`s had about twenty years to establish itself in our county.

Although last night`s trap was disappointing, the arrival a book literally about 10 minutes ago was certainly not a disappointment - Chris Manley`s British and Irish Moths, 3rd Edition. It is much larger than the 2nd Edition, with c 2/3rds of the book devoted to micros (- excellent!).

Chris, of course, lives in SE Carmarthenshire and has already added several species  to our county list and some of his superb photos can be seen elsewhere on our moth blog. Anyway - must go - I want to have a `proper` look at the book, as seemingly does another local resident - see below. Well done (again) Chris! 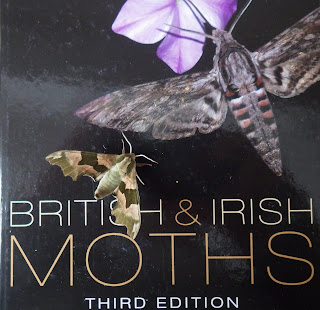 Above: another local seems to be interested in the new book....