At Tyrwaun, Pwll, I used to catch cream-bordered green pea annually (or almost so) but since moving to the western suburbs of Llanelli, I have lamented that the likelihood of seeing this species again in my garden trap would be very small. I concluded that Messrs Dare and John at Burry Port and Pembrey respectively, and Mel Jones `over the water` at Llansteffan, would be the only lucky recorders to regularly see this pretty moth.

Well, I had a surprise this morning when one turned up in my rooftop actinic! It was the only species of note in rather a sparse and bland catch in my actinic and MV garden traps. The weather last night was good for trapping, but the results (numbers and variety) were mostly disappointing. 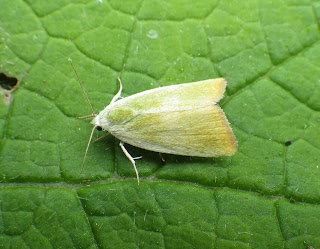 Note that the termen (edge of hind-wing) is tinged orange and not white as in the typical form that is found in most of southern England. Our Carmarthenshire moths are more akin to those found in SW England and may well represent a different colonisation event or routeway. I have copied and pasted at the base of this note some information that I earlier wrote for the Carms moth blog back in 2015. 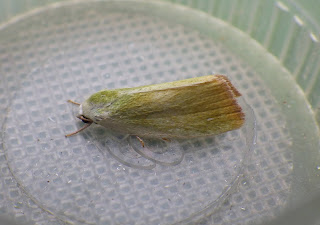 Above: last night`s moth when first photo`d as a `record shot` (in case it flew away later). The richer colours can be better seen in this photo.

"Looking into the life history (larval food-plants etc) of the cream-bordered green pea yesterday, I discovered an interesting online article, `Cream-bordered green pea Earias clorana (Linn.) - A Personal Account of its Occurrence in Cornwall ` by Phil Boggis, where the author tells of its discovery at Carlyon Bay in 1992 and ongoing, later sightings in subsequent years, with proof of breeding.
Interestingly, he notes that the variant found in Cornwall is ab. flavimargo (where the termen is yellowish) and he quotes Martin Honey in saying that `flavimargo is not found in native [ie SE/E English] populations`. This variant is believed to have been established by immigration, possibly from Brittany, the nearest area where it occurs.

The literature (eg MBGBI) suggest that the cream-bordered green pea (as a caterpillar) prefers some of the thinner-leaved willows such as Salix viminalis or creeping willow Salix repens (which all occur at Pwll), but the established colony/s in Cornwall are reportedly using the widespread and common goat willow Salix caprea/cinerea". [from Carms Moth Blog 3.7.2015].