A visit to Carmel Woods

Very recently (21/5) I had to make a visit to Ammanford and, as the weather was nice and sunny (in an otherwise dull and rainy period), I thought that I`d make a detour and call at Carmel Woods en route. It was rather a rushed visit and the moths and other insects were disappointing, presumably due to the late and cold, wet May. A holly blue butterfly was spotted, as was a brown form of Pyrausta aurata, seen at speedwell flowers. 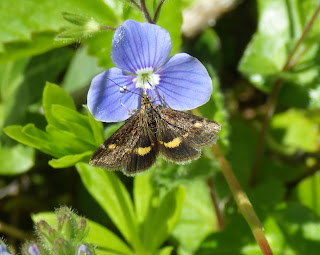 Above: Pyrausta aurata near Garregwenlais Quarry, Carmel.
We all now are aware of ash die-back and Carmel Woods, being ash-dominated, has been changed both visually and ecologically by this disease. The photo below shows a typical scene in one of the many sub-blocks of ash woodland at the site - the ash trees are c 95% dead or dying. Plenty of deadwood for lesser spotted woodpeckers perhaps (which temporarily benefited from Dutch Elm Disease) in the late 1970s. 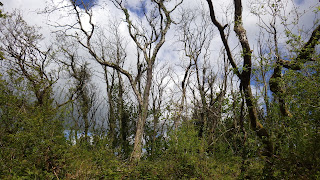 Above: `left click` on this pic to enlarge.
However, all is not lost as it will be interesting to witness the future change in woodland composition at Carmel, with perhaps hazel forming more mature growth of tree-like stature - we forget that hazel is really a small tree and perhaps just view it as a hedging shrub or a coppiced understory shrub. Some other trees that are scattered in the once almost-monoculture ash woods at Carmel are doing fine, such as oak and wych elms on the damper or deeper soils. The increased light may also benefit the understory or the ground flora - which is certainly getting more light this year and perhaps the almost extinct attractive small shrub mezereon Daphne mezereum may benefit - if it still survives. On the other hand, brambles may become rampant for a while.
The route I took on my short walk was the standard pathway from Glangwenlais Quarry to the high view point on the  SW side of the quarry and the amount of light (due to the death of the ash trees) was remarkable along this path which, for many years, had been gloomily shady. It was along this path, that in 1986, I saw what may have been the last pearl bordered fritillary in Carmarthenshire. Again, if they have managed to cling on nearby (sadly unlikely), they too may benefit.
Perhaps it is the wider countryside where ash die-back will have the greatest impact on the landscape and wildlife as farmers may well not replace the hedgerow trees - larval food-plants for moths such as tawny pinion and coronet. I think of the massive and doubtless very old ash tree that stood sentinel at the entrance to Pal y Cwrt on Mynydd Du - when I saw it last summer it was, together with younger trees in nearby woods, clearly dying. Some of these old giants are individuals of character and they will be missed. In woodland on the Carboniferous Limestone as at Carmel we may witness a more diverse evolving assemblage of trees - the distinguished Cambridge woodland ecologist/historian Oliver Rackham, when I took him around Carmel Woods back in late February 1992, thought that the current dominance of ash was a relatively recent phenomena due to relaxation of grazing (fencing off of the rocky ridges which are the woodland sub-blocks) and the rampant capacity of ash to self-sow itself. Hopefully, the latter ability will allow any disease-resistant individual trees to help recolonise parts of the wooded areas in the future. Back in the late 1970s/early 1980s, I pessimistically thought that we`d never see mature English elms in my part of south-eastern coastal Carmarthenshire - but they are now thriving again with some trees already some 40 ft high.