I ran a couple of traps last night, the Robinson MV and a Paul Batty Heath-type with a 22W green synergetic tube.  Sadly the latter failed to last the night.  It was fine when I checked it at 10.30pm and there were several moths around it, including a nice Grey Shoulder-knot, but they had all gone by 6am which suggested that the lamp had expired well beforehand.  I shall run some checks to see which was at fault, the trap or the battery.  Neither trap had been used since last Autumn.

In spite of the set-back, 60+ moths of 17 species were recorded.  Sadly no Blossom Underwings, but the GSK was good to see as was a Satellite, the first for 3 years, a nice Agonopterix ocellana, and what I thought was a thin sliver of vegetation turned out to be Caloptilia stigmatella: 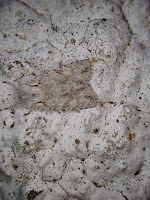 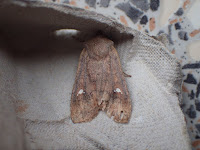 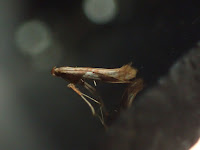 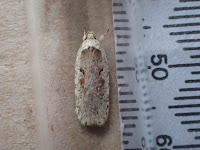 P.S. This new system is a pain, or is it just me?  I used to be able to align photos side-by-side to save space, but this doesn't seem possible any more.  Surely there must be a way of doing it but I'm fed up with trying!  I managed it on 4 March so I don't know what's changed since.