Moth'ers have been anticipating this weekend's southerly airflows for the last couple of weeks, but the first two nights were disappointing. Friday 19th was apocalyptically wet and windy, causing widespread flooding of the Tywi and producing no moths at all, whilst Saturday 20th was a little calmer and drier but only yielded 7 moths of 4 species at the Cnwc-y-llwyn MV. Sunday 21st was the pick of the bunch, with 40 moths of 9 species split between the MV and porch light. Highlight was a stunning Agonopterix umbellana: only the 5th Carmarthenshire record following 2 at the Rhandirmwyn Rothamstead in the 80s, 1 at Maenol in 2016 and 1 at Graig in 2017. It's similar to the somewhat commoner A. nervosa, but with a streakier wing, more prominent dots in the terminal area, a less pointed wingtip, and a dark streak along the centre of the thorax. 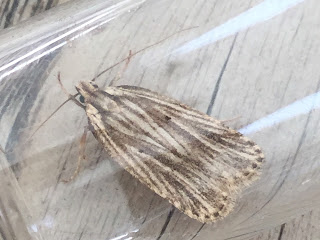