What`s a trip to the shed got to do with mothing? Actually nothing, but on the way back to the kitchen door I flushed a micro which then flitted around in a slightly whirling flight. I thought that I might as well see whether it could be caught if it settled. It did n`t settle but I went into the kitchen to get a tube kept `ready for action`, grabbing one with a diameter of less than an inch. The moth had gone, so I looked around the corner of the house and, luckily, I could see it still in flight. Trying to catch it, in flight, with a tube of limited diameter, was difficult but, after one catch after when it immediately escaped, I caught it on the second attempt.

I glanced at it, put it into the fridge and had my breakfast. 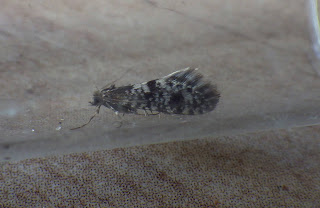 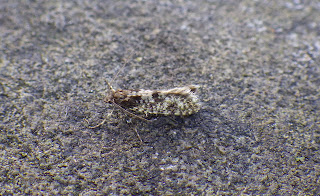 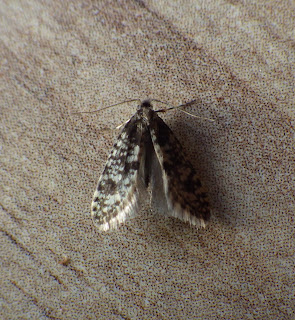 I believe that it is Bankesia conspurcatella. The species is described as flying in the early morning sunshine (mine was caught at 8.15 am) and the season is right. I`m not sure whether I`m more pleased that (a) I unexpectedly chanced upon it (b) I managed to catch it -in flight -with a specimen tube or (c) that it`s a rarity!

PS - I have added another photo, the 2nd one above,