Small is beautiful on a cold night

Having seen (with my usual envy, I may add) good records of migrant moths in various nearby areas of Britain (South Wales included), I perhaps rashly put out my trap on Thursday evening. It was a clear, starlit night with a brisk north-easterly. The next morning yielded only small numbers of moths, with the variety correspondingly poor. The only migrant was a silver y.

However, amongst the catch was a micro that I initially suspected was a gelechiid, but I could not `pin down`, as the markings shown on text book photos did not seem to match up. Following some appreciated input from George Tordoff, it was eventually determined by Steve Palmer as Stenolechia gemmella, an oak-feeder (as perhaps befits my edge-of-woodland garden) and it  has only been recorded once before in Carmarthenshire, by Chris Manley at Pontyberem. 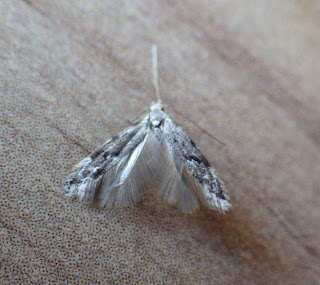 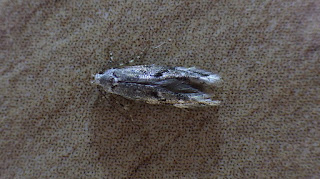