First the latter category: I checked the Robinson trap (20W actinic) at 10.30 last evening just before retiring, and it was being bombarded - literally - by hoards of LYUs.  Consequently it was no surprise to find this morning that they occupied most of the 'berths' on the egg cartons.  The final count was 140, which was almost exactly half of the trap's content.  Only three other species reached double figures, namely Dingy Footman, Flame Shoulder, and Ear moth agg.

The welcome category contains only one moth, Broad-bordered Yellow Underwing, only the 5th time I've recorded it, the last occasion being in 2014.  Not a common species here! 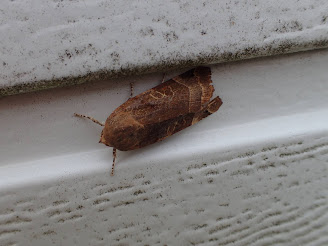 I apologise for the poor quality of the image but the moth wasn't looking its best at 5am this morning, and it's good enough for identification purposes which is my main concern.