At first sight this small moth caused me some consternation, I couldn't remember seeing its like before but somehow the way it moved, darting rapidly from one place to another, seemed vaguely familiar.  Eventually I homed in on the Nettle-tap, a common sight in my garden (albeit less so this year than in previous ones).  However, its appearance was nothing like that of the daytime-flying moth, nor does it resemble the images of Nettle-tap that I've seen in publications or online.  In particular, the rectangular patch of brilliant white at the moth's tail end was strange, even though it might be explained if the forewings were folded in such a way as to expose a corner of the hindwings.  Are the hindwings of Nettle-tap pure white?  I haven't noticed that feature.  I'm sure that there's a simple explanation that I'm missing, or I'm on the wrong track altogether, if so perhaps some kind person would put me on the right one - please!! 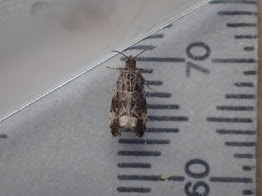 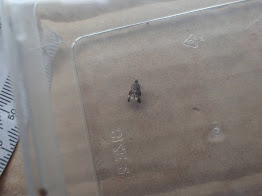 Incidentally, the moth was in my small actinic trap yesterday morning.  Also in the trap was an Oblique Carpet, Beautiful China-mark, and plenty of the usual seasonal species including a manageable number of LYUs - only 15!
Posted by Chris Handoll