On 30th I put the Actinic out at the last minute, more in hope than expectation. Sure enough during the night the heavens opened and at 04.45 I staggered down to a soaked trap and what looked like a few of the usual suspects within. I potted a strange looking Riband Wave, put the trap under cover, secured it against the crafty robin and had a few more hours shuteye.
The first moth that greeted me after breakfast was a Beautiful Hook-tip, new for me and well named. After that it was the usual - Brimstone, Spectacle, Garden Tiger, Elephants, Rustics etc plus 3 Double Striped Pugs and a plain looking pug, very fresh but few markings which I duly potted.
Writing up notes and inspecting the fridge pots I came upon the earlier, rather battered 'Riband Wave', and on closer inspection it didn't have the nice kink in its 'wave', and was a bit small and plain looking. I sent a pic to Ian ' saying 'Could this possibly be Plain Wave?'  Both Ian and Sam have now confirmed that it is indeed a Plain Wave. Very exciting as it is the first confirmed Carmarthenshire record.
And then there was the rather unexciting looking pug. I put that on the Facebook page 'Pugs in Flight Tonight' and almost immediately had a response saying Haworth's Pug, identified by size, pink blotch on the thorax and lack of discal spot.
So what I thought would be a bit of a waste of electricity turned out to be a bumper night of three new moths for me,  one of which was new for the county. 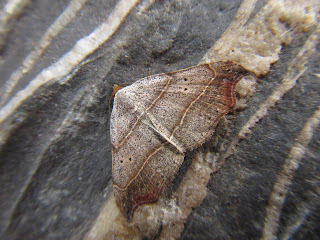 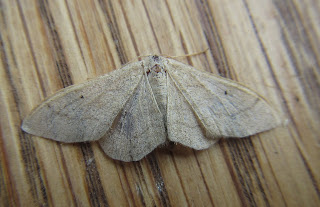 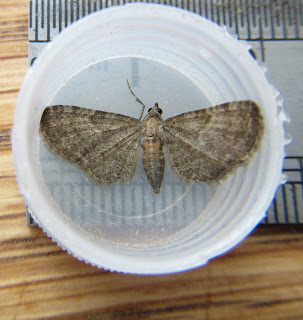 Thanks to Sam and Ian,  and to the FB Pug group, who are all always really helpful.