I'm managing to get a trap out most nights when conditions permit, even if it's only the small 6W actinic, but I don't know for how long I'll be able to keep this going, the will is beginning to flag in the face of all the Yellow Underwings that turn up at this time of year.  Last night's catch was a little underwhelming but I did get this tiny momphid: 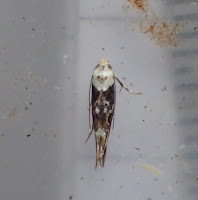 I'm fairly sure that it's M. propinquella which has cropped up here four times previously, the last  occasion being in July last year.  It's no wonder that these supposedly common moths are not recorded as often as they might be, they are so easily overlooked in a trap full of Yellow Underwings and the like!
Posted by Chris Handoll