"I`ve got a lovely bunch of cocoonets"

Yes, it`s cocoonets, not coconuts and I`m referring to the white moulting cocoons of the micro-moth Bucculatrix thoracella which can be almost effortlessly spotted on the underside of lime tree leaves. The moulting cocoons are used when the larva moults its skin and can be noted under the leaves at present. You may also see the hook-shaped leaf mine (not shown below).
Have a look at your local lime trees - it may be an easy record for your local area. The ones below were seen on some urban lime trees (Tilia x vulgaris) opposite Llanelli railway station (where I`d unsuccessfully gone to check some London planes for another leaf miner).
Shortly afterwards, I then gave up for the afternoon after spotting a massive crop of blackberries (the commonly-naturalised variety `Himalayan Giant`). Whilst gathering a large bowl`s worth, two common micro-moth mines presented themselves on the bramble leaves - the very common Stigmella aurella and the `white blotch`Coptotriche marginea. 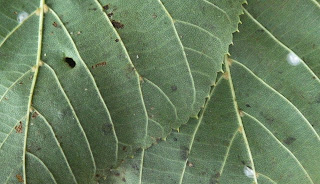 Above: three cocoonets can been here - at the top left-hand corner and two towards the right-hand side. Below: a rather blurry close-up of one. 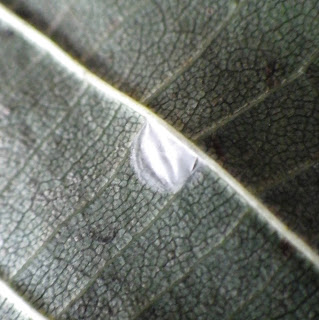 I`ve not trapped much at home over the last week or two and, when I have, the results have been poor to mediocre, so full marks to Adam Dare and Chris Handoll in particular for their efforts and blog posts. Also good to see others posting on the blog site.
Posted by Ian Morgan