Bits and pieces - fun at Ffrwd and elsewhere in SE Carmarthenshire

Although not in the same league as Jane who, with her capture of three excellent macro-moths achieved `triple glory` at Rhandirmwyn this week, I carried out some day-time searching over the last couple of days which also provided some records.

On Wednesday (1/7), I visited Frwd Fen, a reedbed/wetland reserve jointly owned by the Llanelli Naturalists and the Wildlife Trust near Pembrey. A Coleophora spotted on a bramble leaf looked decidedly different from the ubiquitous C. serratella that I often find.  After a bit of online checking, it seemed that my Ffrwd Coleophora was not actually a bramble-associate and I suspected that it may have been blown off the surrounding sallow canopy above by recent strong winds. C. lusciniaepennella seemed to `fit the bill` and George Tordoff later kindly confirmed it as such. Photo below:

A few moths were on the wing or flushed - many five-spot burnets, some Glyphipterix thrasonella, a couple of shaded broad-bars and one or two others. 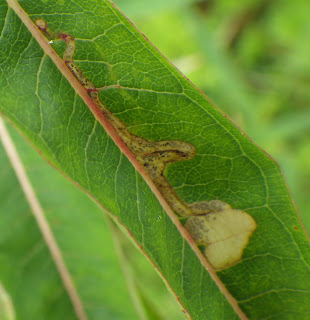 Above: I recently mentioned some common Mompha spp. leaf mines etc on willowherbs. Well, here is another common species - and one for Sally to find - this time on rosebay willowherb - M. raschkiella. Just check your local stands and it may well be there. Incidentally, in the 1st photo above (the one showing the rosebay en masse), you will note a tree in the middle distance. That is a true black poplar (rather than a hybrid or variety) that I planted back in about January 1994 - it`s now about 30ft high. I`d grown it, along with others, from some cuttings from Pysgodlyn in Mons (Gwent)....more on poplars later.

The next day (Thursday 2/7) saw me at a couple of sites in extreme south-east Carms. First of all I visited an area of rough ground immediately next to the sewage works at Llangennech, an area of a mixed weed community with much goosefoot, mayweeds etc. Both these plants have local or scarce moths associated with them but I found nothing of note, though silver ys (x3) and diamond-back moths (x5) were flushed. I could n`t linger, as the site is on an island which is cut off by high tides and the tide was coming in.

I mentioned poplars earlier. Last year, I discovered some mines of Phyllocnistis unipunctella on balsam poplars at Llanerch (Llanelli) and remembering one such tree at Bynea (outside `Dyfed Steels`) I had a look and was pleasantly encouraged to immediately find some mines. 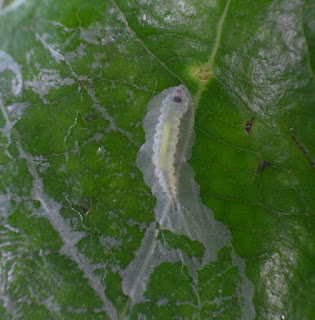 Above: the `snail-trail` leaf mines of P. unipunctella which burrows just under the epidermis. I`m not sure if this species has been recorded in Ceredigion, but vc 46 mother`s will have a good lead as Arthur Chater, in his magnificent Flora of Ceredigion, gives full details (on p 430) of where Populus `Balsam Spire` grows in that county. It may also occur on other poplars.
I finally went to the nearby Morfa Berwig LNR and although there were several common moths to be seen, nothing noteworthy was recorded. The soldierfly Stratiomys singularior  (and another soldierfly - Oxycera rara seen the previous day at Ffrwd), may be of interest to some.
Posted by Ian Morgan