Note: I have added a couple of extra photos and some minor bits of text to this blog since first posting it yesterday (7/7). I have also corrected a couple of `typos` etc.
One casualty of the lockdown imposed due to the Covid-19 crisis (July 6th was the first day that we were allowed to venture more than 5 mls from home) was that I was unable to continue with my springtime (c mid-April to mid-May) search for adults of the alien micro-moth Pachyrhabda steropodes, a species first discovered by Jon Baker on ferns in Aberglasney Gardens near Llandeilo. Since that discovery, it has colonised the mid-Tywi Valley area from Abergwili to at least just beyond Llandeilo and with records as south of the valley at the NBGW and (less so) at Gelli Aur. Furthermore, Steve Clarke caught a singleton at Cwmllwyd on the northern edge of Mynydd Du and, in 2020, Sam had one at Cnwc. It favours soft-shield fern Polystichum setiferum which, in turn, likes base-rich soils. Pachyrhabda may have been expected by now to have reached the Carboniferous Limestone ridge woodlands (to the south) and their profusion of that fern, though a recent checking of woodland at Crwbin did not reveal its presence. Since first posting this piece on the blog, Sam has informed me that it has also been recorded at Johnstown, on the western side of Carmarthen town - it is evidently on the move.

Glancing through the ever-useful British Moths (2nd Edition) by Chris Manley, I noticed a photo of the seemingly distinctive tube-like spinning that the Pachyrhabda larvae make on the underside of fern fronds and, thinking that it might be an useful characteristic to extend the season for recording this moth, I ventured forth yesterday (6/7) to one of its known sites. The site visited - again close to Llandeilo - is where I recorded many scores of adults a few years back; it has the advantage of easy access and an abundance of soft shield ferns. 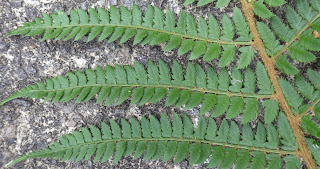 Above: this is what soft shield fern looks like - a view of part of the frond from above; note the `spikey` tips to the pinnules (the leaflets). 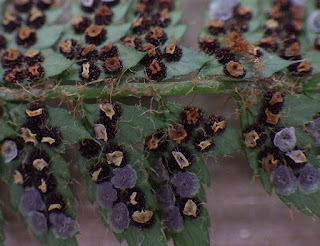 Above: view of the underside of part of a frond, showing the sporangia capsules that hold the individual spores (the dark bits - left click on pic to enlarge). Many of the fronds at the site visited had the underside stripped bare of sporangia by the feeding Pachyrhabda larvae. The above photo was taken of a frond away from Pachyrhabda`s known current range in the county. It clearly has the potential to hugely diminish spore production in Polystichum. 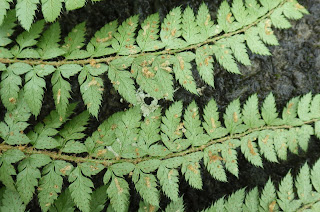 Above: this shows part of a soft shield-fern frond that has been utilised by Pachyrhabda and a quick count shows approximately 15 or so larval tubes (some quite deteriorated) within this photo. I took a half-dozen fronds (of c 2+ ft in length) home with me for further inspection and some of them had 50+ larval tubes per frond, with the result that they were quite stripped bare of sporangia. 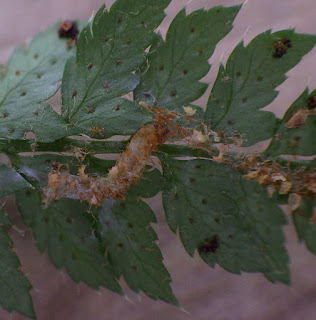 Above: Here we can see one of the silken tubes created for shelter by the larva of Pachyrhabda as it wanders over the underside of the fronds eating the spore-bearing sporangia. Note the absence of sporangia - eaten by the larvae. 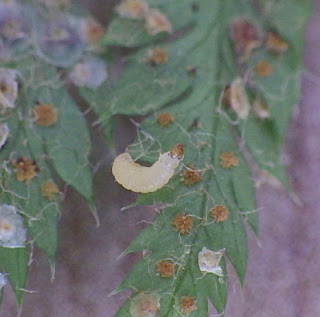 Above: This was the only larva that I found in one of the numerous silken tubes, in spite of each frond holding very many such tubes - > 99% were vacated. In other words they need investigation earlier in the season and I`m sure that a visit in early June would have shown them to be mostly occupied. However, the empty silken tubes may still provide evidence (or at least an indication) of the presence of Pachyrhabda. I cannot absolutely say that the above larva is Pachyrhabda - though it does resemble online photos of the related Stathmopoda larvae - all that I`m stating is that the larva shown above was within one of the silken tubes. 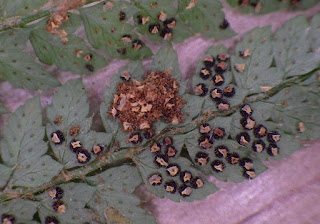 Above: be aware! Pachyrhabda may not be the only micro-moth feasting on sporangia. Above is a photo of the different-shaped feeding spinning made by Psychoides spp. and, given its relative neatness and the larva (shown below) having a black (rather than brown) head, I believe it may be P. verhuella. This species is far less common in Carmarthenshire than the related P. filicivora. 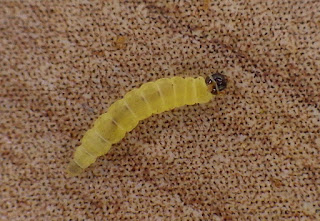 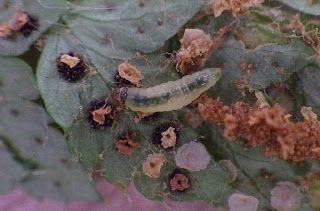 Above: to further confuse matters, the above larva was also found close to a Psychoides spore mass feeding spinning. It has a lighter head and a distinct gut line (for what that`s worth). 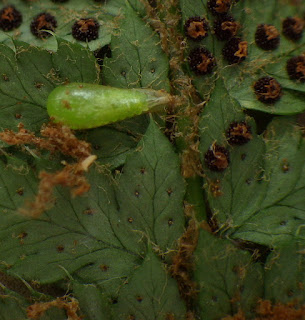 Above: it may not be all `plain sailing` for the various micro-moth larvae as the concentration of food may attract predatory invertebrates. This may be a dipterous larva (hoverfly?) utilising that food source.

I may return to collect some soil and leaf litter from around some of the soft shield ferns that have the abundant silken larval tubes, to investigate whether any pupae can be found. Perhaps I shall retain some until next April to see if any Pachyrhabda emerge.

A Postscript...
In the last couple of weeks, I was made aware of two photos (one on the Glamorgan moth blog) of the related Stathmopoda pedella which had been very recently recorded in Glamorgan, one at Gorseinon and the other on Gower (both very close to south-east Carmarthenshire). Furthermore, Sam also emailed me to say that he had recently recorded it (in Mons) by beating alders, its food-plant (the larvae feed in young alder cones). Today (7/7) I ventured out mid-morning, before the anticipated rain, to do some general daytime moth recording in the Ashpits Pond area, between Pwll and Burry Port. The first `beat` of an alder branch produced the individual of Stathmopoda pictured below - what luck! However, it went missing for a  brief panicky period after I`d tapped it into the net. I`d seen this distinctive moth momentarily and then I`d swiftly closed the net to prevent escape and to get a container ready - who would believe me without the specimen? Upon peering into the net it was nowhere to be seen! In the event, it was there, accidentally hidden behind an alder leaf, and it was duly potted up - phew! It is new to Carmarthenshire. The individual was on a solitary young alder (c 20 ft high), part of an amenity planting, rather than in old alder carr which I`d hitherto imagined would be its habitat. I did some beating of the few alders (as well as grey alders) growing in nearby planted woodland, but no more individuals were found. 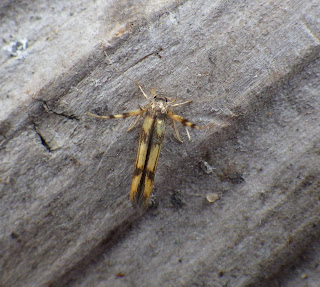 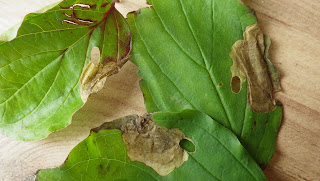 Above: a leaf mine that I`ve searched dogwood for previously is that of Antispila metallella, but I`d only found mines of a fly that also mines this shrub. Today, I was lucky and found a few leaves mined by Antispila on the northern side of Ashpits Pond - another new county record. `Good going` for a quick mothing session!
Posted by Ian Morgan