Thursday night produced three moths of particular interest amongst a hoard of others which were of very little interest, but got recorded anyway (81 LYUs, for example).  Firstly, a small gelechid which I believe to be Bryotropha affinis: 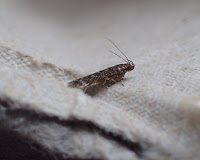 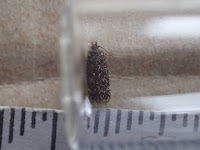 I'm indebted to a fellow Facebook Group subscriber for pointing me in the right direction for this one.

The next I managed on my own, the crambid Anania crocealis which I've seen only once before, in 2014; and finally a mystery moth which I think is a tortricid, vivid in colour but short on scales which might have revealed some markings - or possibly not.  Anyway, the shape seems quite distinctive so someone might recognise it:

Sorry Adam, you might have promised not to post affinis again, but I haven't - and it's a first for me!
Posted by Chris Handoll