Welcome to the moth zoo...leopards, tigers and elephants

The hot spell of the last three days and nights has resulted in me trapping on each night since Monday in my garden on the very north-western edge of Llanelli, a site usefully immediately adjacent to extensive mixed woodland. If it`s uncomfortably hot in bed, then that is a good indication that you ought to have the moth trap out and last night (Weds 24/6) was certainly such a night. Moths were in very good numbers and excellent variety (c 60 spp), though there was a complete absence of migrant moths. I`ve still got some micros to look at. 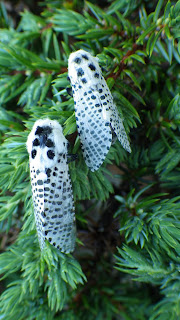 Above: last night`s two leopards (note the difference in head markings). I had two about the same date last year and they must be wanderers from nearby woodland. Incidentally, they are resting on juniper (where I`d placed them) and this particular juniper is a cutting of native prostrate juniper from Cadair Idris, where it was rediscovered in the early 1960s (it had been originally found in Victorian times). When I was living in nearby Corris in the late 1970s, I was given a cutting from a plant in the garden of `Brynhyfryd` in that village. That plant was itself from Cadair Idris stock and had been grown by one of the botanists (the late Mrs Dorothy Paish) who had re-found it. 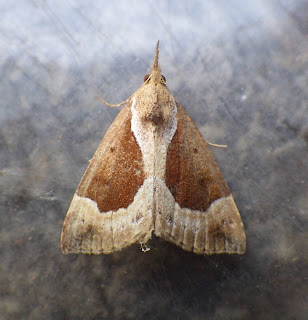 Above: another woodlander that made a warm night trip to my trap was this beautiful snout, the second in recent weeks. Last night, Eudonia delunella was easily the most frequent of the `grey crambids` in my trap, with 13 compared to just two E. mercurella. 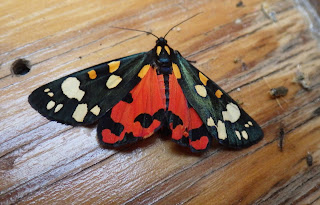 Above: a poor, rushed and `in-the-trap` shot of last night`s scarlet tiger. I`d also seen one in the garden during daytime a few days` back. 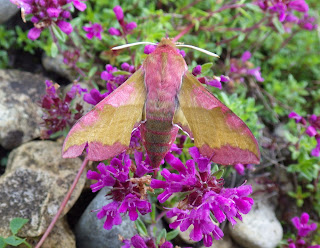 Above: there were plenty of elephants in my two traps this morning, but predominantly of the larger variety. However, there was a single small elephant hawk-moth also present. 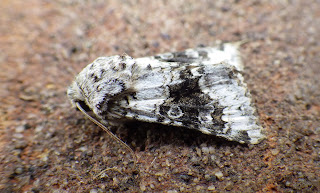 Above: a single broad-barred white greeted me in the garden tarp on Tuesday morning - my first of 2020 and following Adam`s and Steve`s recent records.

Tonight (Thursday) looks like a good night to trap, with possible thunder and lightning - always good signs for a bumper moth crop. I`ll have the rain shelter over my MV.
Posted by Ian Morgan