...was a modest affair compared to others, but once again trapping was a last-minute decision and I relied on my small Robinson actinic trap to do the business.  Fewer moths turned up than on the previous two occasions although 50 species were recorded, including FFYs Barred Red, Purple Clay, Shark, and Minor Shoulder-knot: 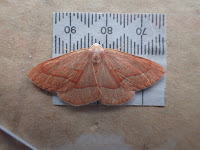 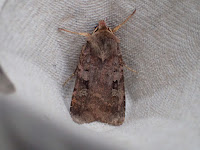 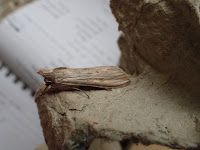 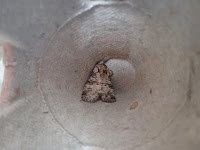 I can only marvel at Sam's bumper night, pity he was operating in a different county!  Never mind county though, I might as well be on a different planet as far as the ability to clock micros as they come to the trap is concerned.  Lack of expertise and failing eyesight mean that I have to pot them up, and in most cases rely on photographing each one and comparing the images to published ones - which can be very time-consuming indeed.  A case in point has been this small (4-5mm) micro from Thursday night: 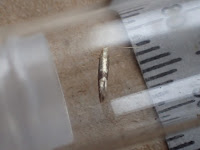 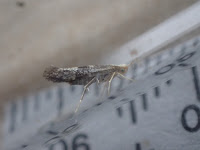 It doesn't help that my photographic skills leave much to be desired as well!  Dozens of images and much browsing of books later I concluded that the moth was an Argyresthia sp., probably either glaucinella or spinosella.  Fortunately it's not always such hard work, it didn't take me very long to decide upon this Agonopterix nervosa: 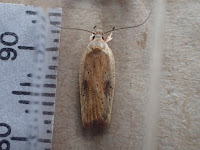