Being Saturday night I went for minimum effort, so the small actinic Skinner trap was put outside the front door, meaning that at 4.15am all I needed to do was seal the trap, photograph the moths that had remained outside it and return to bed.  This morning I clocked 160 moths of 48 species, nothing too exciting but nonetheless a worthwhile venture with FFYs Blood-vein, Brussels Lace, Four-dotted Footman and Dot Moth.  Micros included two grey Tortricids which were not familiar.  I suspect that the first is probably a Cnephasia sp. but the pale dorsal patch is quite distinctive so I'm not too sure: 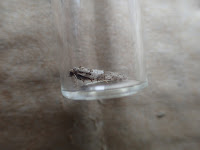 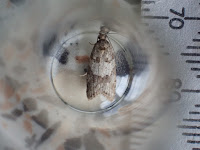 The second I believe may well be the Spotted Shoot Moth (Rhyacionia pinivorana).  Confirmation or otherwise would be much appreciated: 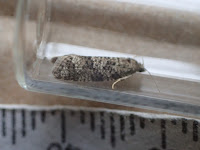 Update:  I've taken some more photos of the second moth, and the more I look at them the more I think that it's just another Grey Tortrix (Cnephasia sp.): 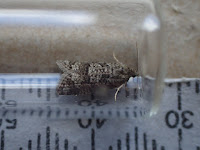 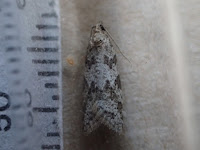 It was the spottiness of it that made me think that it was something different, but I've since found images of some quite spotty Grey Tortricids.
Posted by Chris Handoll