Thank goodness for the noble efforts of Adam and Chris in keeping the moth blog going recently and poor marks for `yours truly` for neglecting to post for some time, so an update is due!  It would be good if other past regular contributors could also kindly add their sightings from time-to-time. Recently, I`ve been trapping rather irregularly at my home garden trap site but, as compensation and also for the first time, at another garden at a VERY urban location in Llanelli (it`s close to the railway station for those of you who know the town). The main purpose of trapping at that latter site is to discover what moths can occur in a small garden surrounded by street after street of terraced housing and rather bland green space. Actually, the first couple of traps have proved mildly interesting, with more species than anticipated and a different `mix` to my main woodland-edge home garden trap - for example species such as the lackey and lime-speck pug being more regular.

Back at my garden trap, there has been the usual mid-June assemblage with regulars such as privet hawk-moths on several dates, the first southern wainscots and, again this year, the tortricid Pammene fasciana is proving to be quite regular. Two conifer woodlanders turned up a few days ago - the pyralid Dioryctia abietella and Lozotaenoides formosanus (photos below). 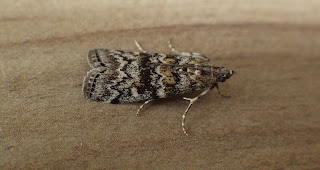 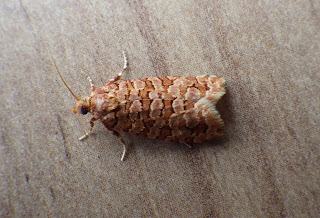 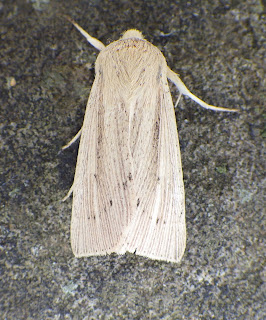 Above: southern wainscot, note the pointy wing tips - also the head, when viewed from the front, will show a distinct line going across the forehead.

As in previous years, I`m continuing with daytime recording and, mid-week, I was initially optimistic that a Syncopacma that I`d seen at a wet brownfield site (at Dafen, Llanelli) with much greater bird`s-foot trefoil may be the rare larsienella, so I returned the next day to capture one. Unfortunately, examination of the underside of the wings proved it to be the more frequent taeniolella, as it had a very distinct pale stripe under the forewing and also a costal dot under the hindwing. It must have wandered slightly from adjacent drier brownfield that supports common bird`s-foot trefoil. 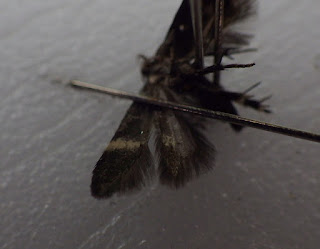 Above: a rather blurry and unattractive photo of Syncopacma taeniolella showing the underwing markings of that species.
Five-spot burnets were frequent around the damper areas at this brownfield site and mature caterpillars of peacock moths were spotted on some nettle patches. 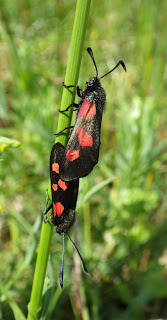 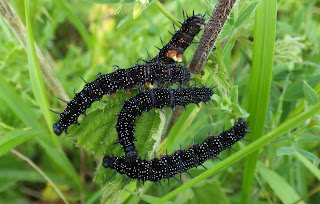 Above: five-spot burnets and peacock caterpillars. 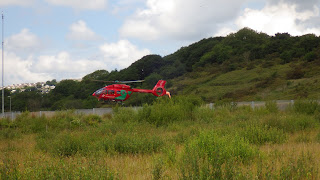 Above: a (very) large red damselfly? ....no, it`s the Wales Air Ambulance about to land. If you see a red helicopter flying over your area it is very likely to be based here - right next to one of my mothing brownfield sites at Dafen, Llanelli.

During daytime recording, I`m on the look-out for leaf mines and, to give just one example, a species that I am finding a lot of this year (probably because I`m looking for it) is Mompha eplilobiella, whose caterpillars can be easily found in spinnings at the tips of greater willowherb. Photos below of one collected from Heol y Lloetrach, Pembrey: 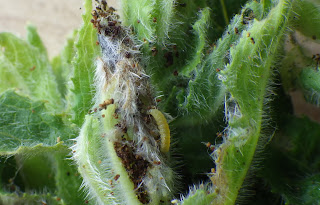 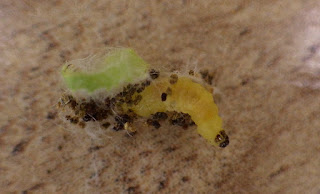 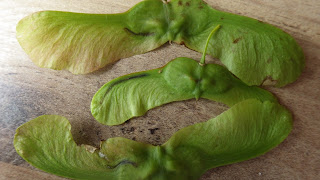 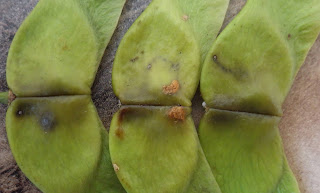