I trapped again last night (1/6) with that night being the last of four consecutive garden trapping sessions. Hoped-for rain is forecast for the early hours of tomorrow morning, giving me an excuse to rest the traps, though I`m sure that tonight would also be a good night to trap, given the nocturnal temperatures.
Once again there was a different variation of the moths constituting the c 40 species noted and I still have a few moths to look at with a fresh mind tomorrow. I`ll just show a very few here: 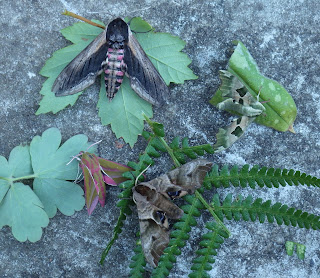 Above: `a gathering of the clans`: privet, lime, eyed and elephant hawk-moths. Left-click on pic to enlarge. There should have been a poplar hawk-moth in this photo, but it did n`t `play ball` and started to `whir` its wings just before the photo was taken. I did n`t want it to encourage the remainder to do the same, so I allowed it to go its own way (fortunately away from the rest). 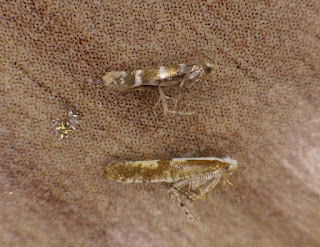 Above: from large to (very) little. Two species of Argyresthia, with A. pruniella below (it is associated with cherry trees) and A. trifasciata above (it is a cypress-associate).