The uncomfortably hot night of Thursday 25th meant that a decent sleep was difficult to achieve, especially when thunder and lightning regularly added their effects and it is only today (Saturday evening) that my depleted brain cells are starting to recover! I had gone to bed perhaps too early the previous evening as I was tired after three very early starts resulting from three preceding and consecutive trap nights. It might have been better if I`d inspected my traps periodically for, it seems, that is the way to increase the tally of moths recorded as some species may only make fleeting visits to the vicinity of the traps. Whatever, 75+ species awaited me at about 4.15 am the following morning - a pleasing count, but well-eclipsed by Stephen Ruttle`s c 130 species at Graig in north-east Carms and Sam`s c 145 at Dingestow (in Mons/Gwent). Sam did rather well in terms of scarce and rare moths too - of which more later...

Back at Llanelli, there were no rarities, but I was pleased to get four leopard moths (again Messrs Ruttle and Bosanquet beat me here, with 6 and 8 seen respectively!). Other interest was provided by `wanderers` that is, moths dispersing more widely in the hot and humid conditions from local habitats or possibly farther afield. However, a single lesser wax moth probably did n`t fit that category as it almost certainly came from bee hives sited in adjacent woodland. 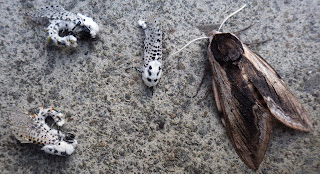 Above: three (two `playing possum`) of the four leopard moths recorded, the fourth was in a puddle of water on the flat roof where the actinic had been placed and the rescued moth was removed to dense herbaceous cover before the other three were spotted inside the trap. In the meantime, I had gone to first inspect the MV trap elsewhere in the garden. 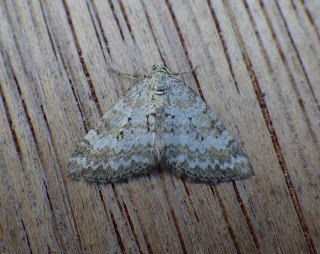 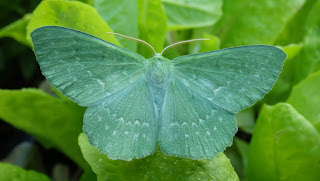 Above: another fresh-looking moth, a large emerald, rather infrequently-encountered in my experience. 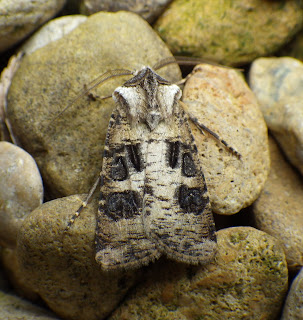 Above: a nicely-marked heart and club. 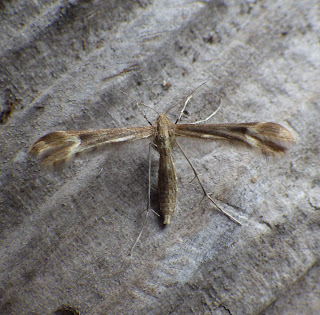 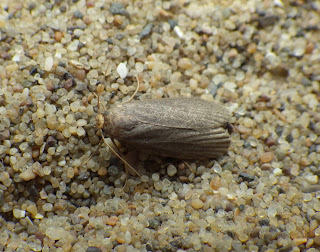 I hinted at Sam`s success with regard to rare moths earlier. I suggest that you read his blog at:
http://gwentmothing.blogspot.com/