Beautiful Brownfield and a Moth Mystery

On Monday (8/6) I visited a remnant area of high quality flower-rich brownfield at Burry Port, located next to a boat-repair yard on the SE edge of town. Generally, it was a profitable morning natural-history wise but it did generate a bit of a moth mystery or, rather, one involving a caterpillar.

Among other things, the site is probably the last locality in the Llanelli area where one can find bladder campion growing in quantity and, since that plant is a major food-plant of the tawny shears, I`ve always considered that moth when visiting. Unfortunately, given its proximity to a housing estate and main road it is not a place to leave an unattended moth trap. 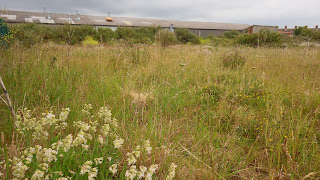 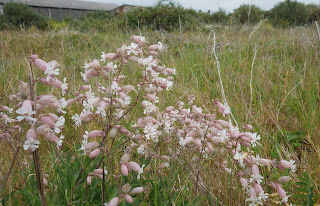 Above: a general view of part of the site with bladder campion (with white calices) to the left and a pinkish version in the photo below. 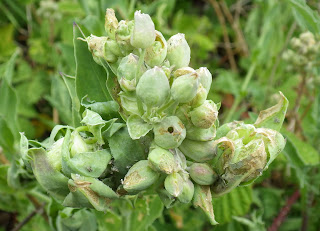 Above: it`s probably best to `left-click` on the photos. Photo 1 shows the hole in the seed capsule that first caught my eye, note also the nearby browsing marks made presumably by the feasting caterpillar. The 2nd pic shows those marks more clearly and also some frass (droppings) left by the caterpillar. By now - Pic 3 - the caterpillar has been located (head to left, dropping to right!), but it`s not the light brownish colour that tawny shears ought to be - so, bit of a mystery!
Others will recall that Adam Dare caught an adult tawny shears in his nearby garden recently and there is also a 1970s record of the same species from Burry Port. Barry Stewart also collected what he thought was a tawny shears caterpillar from the adjacent part of the very same brownfield site last year, but I`m still awaiting news from him whether he reared it to adulthood. 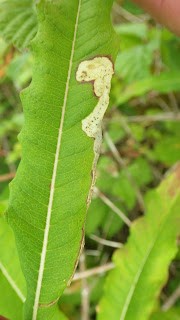 Above: fortunately, I was able to i/d this leaf-mine: it`s Mompha raschkiella on rosebay willowherb.
Posted by Ian Morgan