Some moths from the Llanelli area

I`ve been in semi-diapause recently as the lock-down has interfered rather markedly with my springtime aspirations to go `out-and-about` moth recording in the county. Most of my (nat hist) time has been spent `urban botanising`, revelling in the council herbicide mens` absence. Sadly, they are now again back on the scene. From a potential moth perspective, I`ve found some scattered stands of prickly lettuce Lactuca serriola, which I`ll later check in the long-shot hope of small ranunculus caterpillars.
I`ve done a little garden trapping at home, but the results have been only typical/moderate at best, with small numbers and a restricted variety of moths - the best was a succession of orange footman records and with an alder kitten on 19th May. 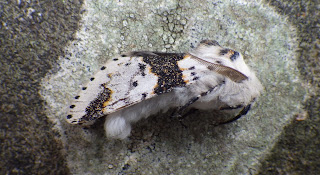 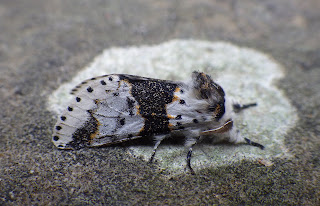 Above: alder kitten, 19/5. Note that it`s `playing possum` in the first photo and that the legs look like the paws of kittens - perhaps this is why they are so named?

Today (27/5) I made a daytime visit to an old colliery site about 10 minutes from my home. As often is the case, such brownfield sites are floristically-rich and consequently also good for lepidoptera. The season`s first meadow brown was seen, amongst many common blues and some diurnal moths were also recorded - Dichrorampha alpinana around the abundant ox-eye daisies; Grapholita compositella associated with various legumes; my first grass-moths - frequent Chrysoteuchia culmella; Pyrausta despicata; some fresh-looking burnet companions and `spinnings` of what is believed to be the pyralid Acrobasis consociella on oak. 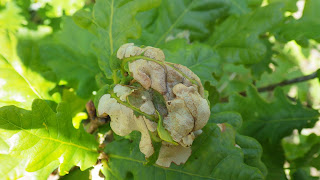 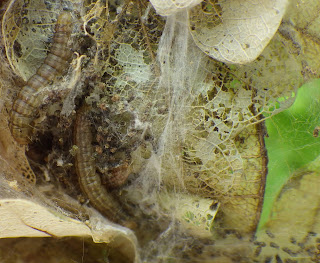 Above: the spinning of Acrobasis consociella on oak tips with, below, one opened up to show the caterpillars.

For those who are interested, I also saw the small robberfly species Leptogaster cylindrica and the `western bee-fly` Bombylius canescens, which is smaller than the more familiar common (and earlier appearing) B. major. B. canescens also has completely clear wings devoid of black markings.
Posted by Ian Morgan