Not a Night for Noctuids

First outing for the Robinson trap in MV mode last night, but it didn't impress the local noctuids, the only representatives of this family among the 70-odd moths recorded were 4 Hebrew Characters and 2 Pale-shouldered Brocades (FFY).  Other firsts were a White-spotted Pug, White-pinion Spotted, Clouded Silver, and a White Ermine. 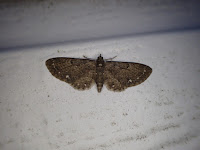 Micros were plentiful, most of them tiny grey/white jobs which I believe are Elachista spp., but I have come to terms with the fact that because of eyesight and photographic deficiencies I am not able to identify the species, so have given up trying.  Since many Elachistas are grassland species their abundance hereabouts is not surprising.  Three species that I was able to identify were Pseudoswammerdamia combinella. the Gelechid Scrobipalpa costella, and Bee Moth. 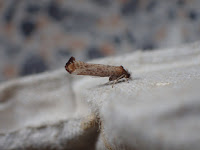 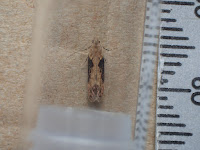 Two other well-marked albeit tiny moths I'm less sure about: 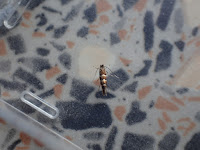 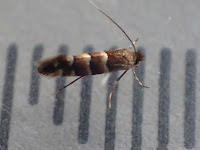 P. nicellii or P. trifasciella are possibilities judging by the published images and the abundance of their respective food plants (hazel and honeysuckle) close to the trapping site. 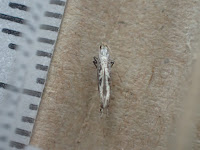 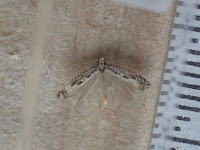