I`m finding the ability to go out into Carmarthenshire on daytime (mostly) micro-moth and leaf-mining surveys very frustrating with my natural history confined to my daily `exercising` which, recently, has been focused on urban botanising. This may help botanical recording - and the urban landscape is currently very interesting weed-wise due to the absence of the council herbicide men - but, with regard to moths, it is rather unproductive.
The sunny spell, before the weather transitioned into the more typical late April showers, was good for garden butterflies, particularly as brimstones (mostly males, but also a few females) were literally daily in the garden - a pleasing product of my planting of some alder buckthorns just outside the garden perimeter. Likewise, holly blue sightings have increased this spring and I like to think that it was due to the maturation of some hollies that I likewise planted some years ago. The alternative food-plant, ivy, is already present.
Anyway, to the moths. I only put out the actinic last night (3/5) and just ten species were present this morning, including a few FFYs of common species. The best moth was an orange footman (which I`d also recorded here last spring). 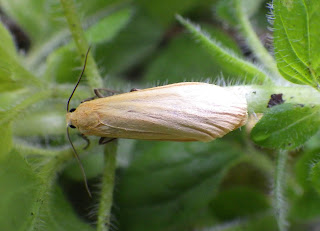 Above: last night`s orange footman during a brief pause as it carried out its escape.
Posted by Ian Morgan