Sallow Kitten moths have emerged from the cocoons I obtained last year, the products of eggs laid in a moth trap last August.  It seems likely that both male and female moths came from the same batch, in which case the eggs are in-bred.  The fact that the cocoons were kept under cover (in the polytunnel) may have caused them to emerge earlier than they would have done 'in the wild', meaning that the male had no competition from other populations. 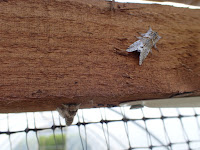 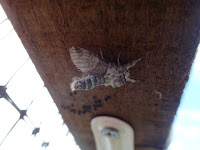