As we approach the mid-summer period, getting up very early to check the traps before the birds get there first becomes more onerous and tiring. I arose at c 4.30 am this morning (I was awake earlier) to check the two garden traps (one MV, the other mains actinic) set out last night (29/5). There was a decent catch awaiting me, but nothing really exciting to deserve an impromptu `Highland fling` to wake the neighbours. There were about 35+ species in total. I shall re-trap tonight, as the really hot nights have the potential to encourage moths to wander and disperse away from their normal habitats. 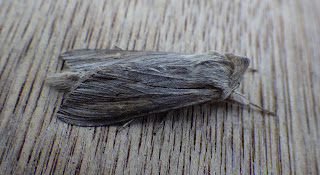 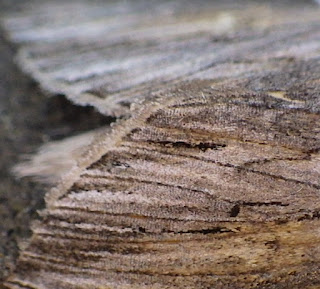 Above: shark, with the 2nd close-up pic showing the rear of the hind-wing. Note that the fringe does not have a continuation of the dark streaks (which a chamomile shark would have).

Often, post the trap-sorting session, I come across moths that I had missed earlier, perhaps resting on walls, fences and the like. The following moth I did n`t see until late afternoon when I watered a large pot plant near and below the position of the (flat) roof-top actinic. It was a large, well-marked pug that, at first glance, looked like a less showy form of netted pug - but it was not that desirable species.

Above: It was a handsome Freyer`s pug.

An attractive, golden-metallic tortricid that I`ve caught before (both at Pwll and at my present garden) is Ptycholoma lecheana. I just managed to get a shot of this male as it made its escape: 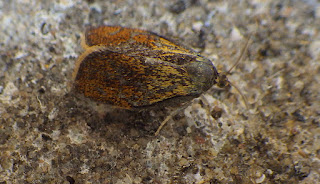