History Repeats Itself at Maenol

At almost the same time last year (April 28th) the Tineid Psychoides filicivora turned up on my bathroom window.  Yesterday evening much the same thing happened only the lounge window was chosen this time. 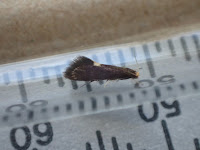 The fern population in my garden is increasing rapidly so I should be seeing this moth more frequently in future.

Update: the fern population suffered badly from frost damage on Monday night, along with new growths on other plants.  I'm assuming that they will recover in time and the P. filicivora population won't suffer a decline as well.
Posted by Chris Handoll