I tried the new trap out for the first time using a 20W actinic lamp, and the small Heath trap (6W) was put at the other end of the garden.  Between them they attracted a fairly modest 75 moths of 22 species, nothing unusual, but Small Phoenix, Oak-tree Pug, Brimstone Moth, Clouded Border, Muslin Moth and Lychnis were FFYs for me. 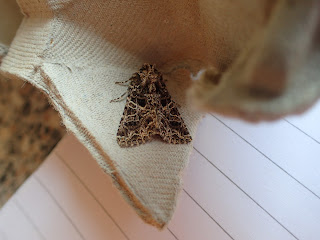 Queen wasps appear to be very numerous just now, they seem to be checking out every nook and cranny as a potential nesting site.  Their offspring are likely to be bothersome at moth traps later on, if last year is anything to go by.  I'm guessing that the mild winters of recent years have allowed more of the queens to survive hibernation.